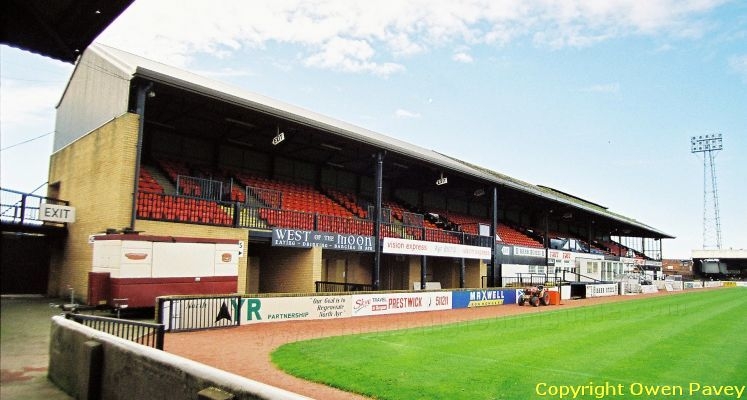 The Ayr United Family Tree Ayr United Football Club was formed as the result of a series of amalgamations and counter amalgamations. It all began in 1872 when the Ayr Thistle club got founded by a group of lads who used to meet on the steps at the foot of Wellington Lane. One of those youths was Thomas Templeton, a future provost of the town. In 1910 he was a neutral participant in the amalgamation talks between Parkhouse and Ayr FC prior to becoming a regular supporter of the newly-formed Ayr United right up until an illness preceded his death at the age of sixty-three in August 1918. At the outset Ayr Thistle played on the Low Green, the town’s first football venue. The pitch ran on an east to west alignment. In 1875 Ayr Thistle decamped to a field situated just off Midton Road. They called it Thistle Park. One year later the club moved to a field in the present day vicinity of Robsland Avenue, just off St.Leonard’s Road. It was entitled Robbsland (sic) Park.

Ayr Academy also played on the Low Green from 1872. Ayr Eglinton, founded in 1875, played at the Racecourse (now known as the Old Racecourse). In 1876 these clubs amalgamated under the name of Ayr Academicals. Initially that club played at Mr Dewar’s Cattle Show field then, from 1879, they played at Springvale Park, the site of which is indicated by the street still bearing that name (off Midton Road).

When the Ayrshire Cup competition got underway in 1877 Ayr Thistle did not participate because they had loftier ideals. In layman’s terms this meant that they thought themselves too good to enter. Yet the club was not too proud to amalgamate with Ayr Academicals in 1879. The new combine was termed Ayr FC and the agreed venue was Springvale Park. In December 1922 it was announced that houses were going to be built on that site. At that time there were locals who could recall the pioneering football matches at that location and even Penny Farthing races. In the summer of 1884 Ayr FC quit Springvale Park for nearby Beresford Park. The playing surface ran parallel to Beresford Terrace.

It is commonly known that Ayr FC eventually merged with Parkhouse to create Ayr United. So how did Parkhouse evolve? That club originated in 1886 at which time they played at Ballantine Drive and trained at Parkhouse Farm. It was a short stay at Ballantine Drive. The club soon began playing their home matches on the Racecourse (Old).

Ayr FC’s existence at Beresford Park fell under threat in 1888. The site was requisitioned annually in order to accommodate the Cattle Show and in that year it was required at an abnormally early date. Ayr FC had outstanding fixtures yet the ground would not be available for a month. The Townhead location rendered the rent expensive but it still required to be paid despite the club being turfed out. This crisis was addressed by the committee’s decision to urgently look for a new field. The chosen location was in the lands of Hawkhill at the junction of the Glasgow and Mauchline railway lines. Due to a lack of grazing the grass was in poor condition but this did not deter a satisfactory rent being agreed with W.G. Walker and Sons, the neighbours and owners. The new ground was named Somerset Park. It would be wrong to assume that it was named after Somerset Road. Back then the stretch of road now known as Somerset Road was actually the southern section of West Sanquhar Road until renamed in 1909. The connection in 1888 was the nearby Somerset Place which is now part of Hawkhill Avenue. Somerset Park’s first game took place on the Monday evening of 7thMay, 1888. Ayr FC beat Aston Villa 3-0. It was a complete coincidence that the inaugural match was against a giant of the English game. It had already been arranged for that date with the expectation that the teams would meet at Beresford Park. The Stand at Beresford Park had been taken apart, carted (literally) across town and re-assembled on its new location. It backed onto the railway and it faced a pitch running on a north-south alignment. Parkhouse audaciously moved into the vacant Beresford Park. Their grade of football meant that they were not yet playing in front of a paying public yet somehow the club viewed the rent as affordable.